Indoor Green Wall For Air Purification. The air is contaminated with lots of varied pollutants and toxins.

The indoor air is also not left behind when it comes to the air that we breathe since it also contains contaminants that mostly occur due to cooking and appliances that are not properly vented such as gas water heaters or wood stoves and so on. 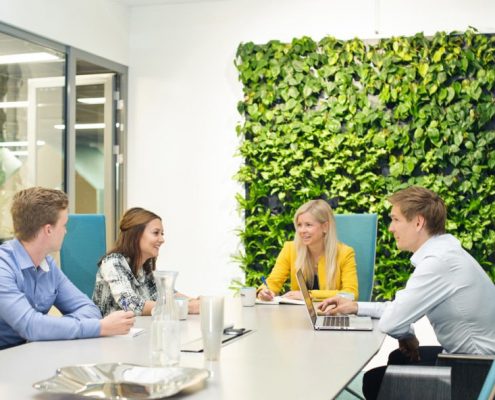 Apart from these there are also chemicals such as VOCs, formaldehyde that are found in the building materials and the furniture that we use day in and day out.

All of these factors are said to be causing the indoor air to become a lot more polluted than the air present outdoors. Hence it becomes important to mitigate such risks but due to the very obvious economies of scale which would mean the volume of air as compared to the number of plants it would not be hard to conclude that the only viable option for improving the quality of the air would come from various mechanical options and carrying out a careful selection of products during the construction and finishing time.

Formaly dehyde is mostly found in furniture, facial tissue, wall paper and cardboard. It is also used as part of the paints, fabric softeners and dish washing liquids.

VOCs are known to be volatile organic compounds and are found in every kind of petroleum products apart from flooring adhesives, furniture, electronic items and so on. Carbon monoxide is one of the most dangerous gas produced from the gas stoves, heaters, open fire and appliances.

It is also present in cigarette smoke and the exhaust of the vehicle. These pollutants can lead to dizziness, headache and other health issues.

Every item present in the house has some amount of toxic chemicals that one should be aware of and hence there is a need to get nature indoors to stay safe and healthy.

Here to our rescue, comes the living walls which are also called as vertical garden. By having certain number of potted plants at home would surely be welcoming and also soothing but when it is living walls then it would mean an abundance of greenery.

Also when everything is in place then it would mean that the plants would not die. Though indoor green wall cannot be considered as a cheaper option when you go in for the prefabricated one but they surely are worth the money you spend. It is known to provide for positive functionality.

We all are living in a stressful and busy lives which is constantly loaded with those pinging devices. Day by day we are disconnecting ourselves from nature which in turn is having a negative impact on our mental as well as physical state.

Ever since the start of the industrial revolution has taken place, the use of modern advancements has led to the increase in the air pollution.

In certain built up regions the rise in the pollutant gases are turning the air to become more toxic. However, nature as mentioned earlier can be used to reverse this effect and reduce the damage that is being caused.

Since out childhood we have been taught that plants are there to naturally take in carbon dioxide and in return they produce oxygen which is clean and fresh.

But it is quite lesser known that these plants also help in filtering the air present around them by taking in or absorbing and cleaning up the toxic pollutants. This effect tends to multiply with the number of plants you place in the living walls.

There have been Green wall research wherein it shows links between improvement in the quality of air, greening of the indoor area, a lot of natural light and also good health and well-being of the people residing there.

Those businesses which are operating in buildings that are certified with LEED have shown rise in the employee productivity and reduction in the stress level and absenteeism of the employees. There are basically two kinds of plant walls you can choose from.

The mechanical process of the passive living wall is known to involve just the nutrient and water delivery and it mostly counts on the natural flow of air either through a house or a building for providing improvement in the quality of air. The active living wall on the other hand is said to be a bit more on the complicated side when it comes to the construction of it and it is said to involve circulation of indoor air mechanically through the wall. 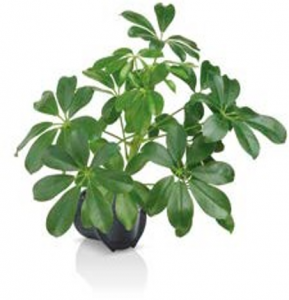 For getting rid of toluene, benzene, xylene you can plant orchid, Kimberly queen, or dieffenbachia. With the help of the photosynthesis process, plants take in carbon dioxide and in turn they release oxygen in the air thus making the air cleaner and fresh.

An increase in the levels of oxygen would also help the individual to stay active, alert and awake.

Formaldehyde, Trichloroethylene, VOCs and many more are all harmful pollutants found indoors.

These toxins can be removed by just the roots of the plants or you can also say the microorganisms that live around these roots which tend to degrade and then assimilate these harmful chemicals.

Hence it is a good option to start having living walls or vertical garden at home so as to keep your close ones protected always from the harmful air around. 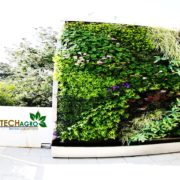 Best Edible Plants for your Vertical Garden
Scroll to top