The living green walls are also referred to as vertical garden, living walls, or Eco-Walls.

It basically refers to any kind of construction or a support structure for growing the plants in the upward direction or in a vertical way. 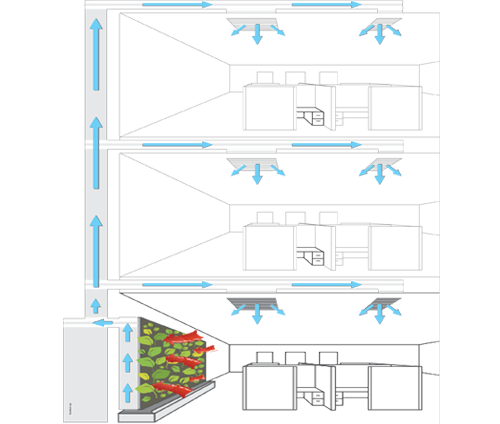 It is known to efficiently as well as productively make use of the existing space for plant production. These green walls are basically constructed in a similar manner to the actual walls.

There is just skeletal structure required for the building which is hung having sections of plants and flowers that would ultimately make up for the Green walls.

When we talk about the functioning of these green walls then a lot of it would be dependent on what type of green wall system has been installed.

Now talking about how these living green walls work, they are surely known to have an impact on your business which would come from these living plants itself.

As we all are aware that plants take in carbon dioxide as well as other toxic pollutants and in return, they give out fresh oxygen which is necessary for humans.

These green walls also work by reducing the noise level and also provide the benefit that is related to the biophilic design. This is that concept wherein people tend to work much better when they are more close to nature within their work area.

These living green walls, when done neatly and correctly, are surely going to make a breathtaking style statement by creating an inviting ambiance.

They turn out to be equally impressive in terms of the overall appearance since they lead to good health and also the plants that are placed in this system would act as a natural filtering system which would surely be enjoyed by the occupants.

These walls provide for a welcoming effect and also a soothing sense of being around the wealth of greenery.

Brings about improvement in air quality:

There have been various studies carried out to show the effect of having indoor plants on individuals and its outcome that is related to the effectiveness as well as the well-being of the individuals around whether at home or work.

Few of the outcomes would include, improvement in the level of stress, better performance in task, positive effect on emotional state and many other psychophysiological ones.

These living green walls act as a natural air filter thereby creating a clean and invigorating environment that would, in turn, lead to a positive benefit for the people around.

In today’s world, we all are being exposed to toxic air whether it is at home or at work and all these toxins create havoc with the health leading to a number of diseases.

Here these living walls turn out to be beneficial in terms of metabolizing all of these toxic and harmful pollutants and at the same time, it releases fresh and clean oxygen.

Reduces the level of noise:

Plants basically are used worldwide for reducing the level of noise by planting them roadside or near the highways. They tend to absorb the noise.

It basically works on the concept that the natural vegetation in a way is known to act as a natural blocker of high-frequency sounds whereas the supporting structure on which the plants are placed would work to help out in naturally reducing the low-frequency noise.

These living walls are known to be acting as additional insulation by having a layer of air in between the plants as well as the wall.

They are also known to reduce the level of noise by refracting as well as reflecting and absorbing all of the acoustic energy present in the environment.

Leads to a reduction in the cost of energy:

These living green walls are known to help bring about improvement an efficiency in the business and this is done through the reduction in the overall cost of energy.

Having these external green walls are said to improve the thermal insulation of the building and it is done by adding in a certain kind of protective layer of plants.

Walls which have green exteriors are said to be nearly 20 degrees cooler than the walls with other exteriors. These plants are basically loaded for absorbing heat than the standard building materials used for the walls.

Due to which there is less of heat that gets transmitted within. This, in turn, is known to get translated into the considerable amount of reduction in the need for air conditioning.

The reason for the same is because having these indoor green walls would, in turn, provide the same kind of cooling effect. Plants would absorb the heat from outside and instead they would release heat reducing water into the air thus making it cooler. This process is referred to as evapotranspiration.

This advantage you can notice during the summers whereas during the winter season there is another added advantage of these walls leading to building insulation that would, in turn, lead to decrease in the cost of energy for heating of the building.

Installation of these living green walls can also businesses with credit points of WELLS and Leeds. This would, in turn, lead to boosting the morale of the employees, increase in productivity and reduction in absenteeism.

Having living green walls also brings about an increase in the value of property wherein it would be creating a favorable perception about the current structure along with an improvement in the carbon footprint which is a must for most of the organizations. 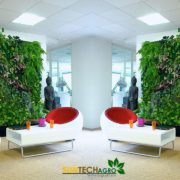 Green Walls – A necessity in the office spaces of the future 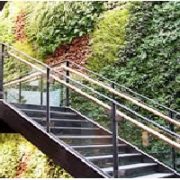 VOCs: Break Free From Them Today!
Scroll to top